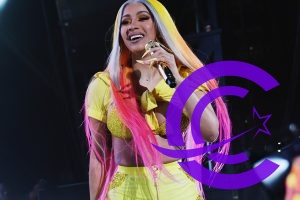 Cardi B may have dropped a strong contender for “song of the summer.”

The Bronx rapper joined forces with Kanye West and Lil Durk on “Hot Shit,” her first record release since 2021’s “Up.” Cardi announced the collaborative track on social media this week, revealing she had been sitting on the single for about three years.

“I think this record is actually older than ‘WAP,’” she said on Twitter Spaces. “It is everyone’s favorite.”

Cardi took to Instagram Live shortly after, admitting she was hesitant to drop the track because it didn’t have an official video. But she chose to drop the joint anyways, as she was confident her fans would enjoy it.

“I love the record. It’s something that I feel like y’all haven’t heard from me before,” she explained. “I feel like people is expecting a lot of slutiness and blah blah blah. Y’all keep talkin’ I keep making TikTok records and this is definitely not that. It’s a fun great record. It’s masculine, it’s great for the clubs, it’s great for the bitches.”

Part 2 of her statement. pic.twitter.com/OXG5VFr8Nx

Kanye teased his Cardi collaboration during a Hollywood Unlocked interview in January. Ye told Jason Lee he just finished recording a verse for the “WAP” rapper, but didn’t share any more details about the cut.

“My cousins was saying ‘Come by here’ yesterday but I was finishing, I was finishing that verse for your girl, you know what I mean,” he said, referencing Cardi B. “I always believed in her since she was on [Love & Hip-Hop], period.”

Kanye talks about working on a verse for Cardi and believing in her since @loveandhiphop .

You can stream “Hot Shit Mp3,” produced by Tay Keith, on Apple Music or via Spotify below.